Free 2-4 day Shipping on all US orders The Hippest Tattoo Ideas for Men for Your Next Ink

People get inked for various reasons. Some get them to serve as reminders of the good and even bad things in their lives. Others use tattoos to express their individuality. There are also those who just think they look cool.

No matter what the case is, getting a tattoo is always a personal matter. It’s a commitment that you’ll wear on your skin forever so it’s important to get the right one.

If you don’t know which one to get yet, here are some of the best tattoo ideas for men that might just tickle your fancy: We know, it’s cheesy having someone else’s name inked on your skin but it’s also a good example of one of the most meaningful men’s tattoos out there. On most occasions, it’s a demonstration of the wearer’s love for or commitment to someone else.

It’s quite tricky getting a name tattoo, though. First of all, you’d want to tattoo the right person’s name on your body. Couples are often tempted to do so but usually end up regretting them when they break up, so we don’t recommend this. No matter how much you love your significant other, if you think you’ll regret it later, don’t have their name tattooed on you. Names of your kids or parents are usually better options, however. They are, ideally, some of the most permanent people in your life, so declaring your love and commitment to them is a wonderful thing to do.

Where to put one? These are some of the most popular examples of armband tattoos in men, so you can always put it there. Some folks also like to put them on their chest, forearms, or fingers. 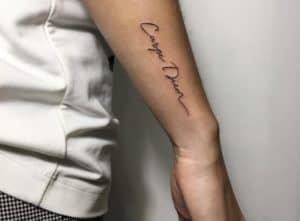 If you don’t want to ink someone else’s name on yourself, you can go for an inspiring tattoo that features a meaningful word or phrase instead. It could be a quote from a song, movie, or book, a line you came up with, or simply just a word that resonated with you. If you have words that hold a lot of meaning for you, they can be the perfect things to have on your skin.

Where to put one? As a simple tattoo for men, some like to place it by their collar bones or forearms. Depending on the design, they can also work nicely as a tattoo for men’s hands.

Something from Your Childhood

Many would agree that nostalgic pieces are considered as the coolest tattoo ideas ever. It says a lot about your personality and what you loved as a child which could shape you as an adult. It can also be said that it can be a great way to express your quirkiness.

In this regard, cartoons, TV shows, movies, or books can offer ideas for the best tattoos for men. It could be an iconic character, setting, or even an event or it could be an obscure reference. Whatever it is, if you connect strongly with it, it might prove to be a great tattoo idea for you.

Where to place such tattoos? Thanks to the amount of space on one’s calves men’s tattoos on legs tend to get very creative and expressive, so you can opt to put it there. Most areas on your arms and back work, too.